Friendly colours for a friendly challenge

In 2011, WA native Rebecca Prince-Ruiz came up with a very simple and very heartwarming idea. Avoid using single-use plastics for the entire month of July. The idea spread amongst the community and now, a decade later, has blossomed into a massive global project dedicated to healing the planet we live on. Prince-Ruiz herself, “never imagined how Plastic Free July would grow,” but with over 300 million people worldwide taking up the challenge this year there is no doubting the impact of this movement.

There is no doubting the importance of it either. Plastic is made to last and it doesn’t just go away when it gets thrown into a trash can. One item can take up to 1000 years to break down. In 2019, National Geographic reported that approximately 8 million tonnes of plastic waste escaped into the ocean from coastal nations alone. That is the equivalent of placing five garbage bags full of plastic on every foot of coastline on the planet. 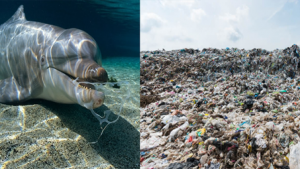 Everybody has seen the photos and videos and yet, plastic production is still set to triple by 2050. The fossil fuels used to make plastics already equate to 189 coal-fired power stations. The Earth and her climate cannot handle the strain that single-use plastic puts on it unless we adjust. Plastic Free July is a great way to make that adjustment and it is wonderful to see big companies and governments trying to instigate change in 2021.

The Australian Government get on board

This initiative builds upon the national law banning lightweight plastic bags as well as the various other strategies implemented or promised by the other states. You can have a look at a full breakdown of Australia’s legislation regarding single-use plastics below according to the Australian Marine Conservation Society. 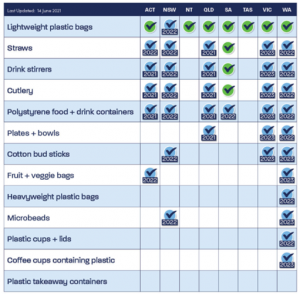 As part of this wave of bans, the ACT government have provided guides and information regarding alternative items designed to help businesses who may rely on single-use plastics. This is undoubtedly a step in the right direction for the 400000 people who live in the ACT as well as the 25 million people who live Australia-wide

South Delhi say no to single-use

Reports surfaced on July 2nd  that single-use plastics were to be totally banned across 20 South Delhi markets. Instigated by the South Delhi Municipal Corporation (SDMC), the ban includes lightweight bags, bottles and cups among other things. The SDMC have conducted awareness campaigns, workshops, rallies, handed out posters and set up stations at said markets dedicated to handing out cloth bags and replacement items. A city level task-force has also been set up and have seized over 1000 kilograms of plastic bags so far. Fines of up to 5000 Rupees (90 AUD) will be given to those found breaking the new set of rules.

Legislation covering a set of markets may not seem too important, but given the fact that roughly 31 million people live in New Delhi, 2.7 million of which live in the South Delhi area, you can see how this will make a huge difference in the fight against plastic waste.

In 2019, the European Union agreed to phase out certain single-use plastics by 2021, as agreed by 560 MEP’s against 35 in disagreement. The legislation came to fruition on the third of July and saw single-use plastic plates, cutlery, straws, cotton buds, cups and polystyrene food containers all get banned from use across the entirety of the EU.

Entitled the Directive on single-use plastics, these bans account for roughly 70% of all marine litter across Europe (Great Britain excluded). The directive also plans to reduce consumption by raising awareness, instigating waste management obligations for producers and enforcing the use of educational infographics on plastic products, as seen below. 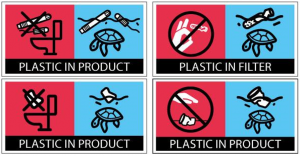 On July 9th one of the biggest airports on earth committed to phasing out plastic water bottles by the end of 2021. As part of Los Angeles’s Green New Deal, the strategy was announced with the support of the city’s mayor, Eric Garcia. This will make an immense difference given that approximately 61000 people travelled through Los Angeles International Airport per day during the month of May. That is just half the daily foot traffic seen in 2019 during the same period and numbers will only continue to increase as COVID restrictions lessen.

As part of the initiative, all restaurants, vendors and cafes at the airport will be made to adjust their products. Vending machines will also be changed accordingly and over 60 new, ‘hydration stations,’ will be installed to promote sustainable consumption.

The fact that efforts are being made worldwide on such a huge scale is massively important to the health of our planet.

In the month of July we have also seen a Walmart affiliated e-commerce retailer remove plastic from their supply chain. There are rappers in Brooklyn making eco music. There is a 12-year-old girl in Hervey Bey selling plastic-free natural products and donating half of the proceeds to the Plastic Free Foundation.

You can check out all of the awesome things happening this July @PlasticFreeJuly and you can take the challenge at their website here!

Jashan is a Melbourne based journalist with a specialisation in sports and media. He also has a keen interest in sustainability and Ethical buying. Check out more of his work at https://onlinehubmedia.com/