Sir David Attenborough is one of the most influential figures in the modern broadcasting space. Breathtaking documentaries such as the Planet Earth series, Our Planet and the Blue Planet series. In recent years, Attenborough’s work has strived to not only reveal the majesty of the natural world, but also reveal the damage that humankind’s pollution has wrought on our planet. 2017’s Blue Planet 2, in particular, focused heavily on the plastic waste that fills our oceans. Such is the man’s influence that, since the release of Blue Planet 2, efforts have increased across the UK and around the world to combat the plastic pandemic. Unfortunately, the fact remains, for every plastic water bottle we pull out of the Pacific, there is a whole garbage truck of plastic dumped into the sea every minute. There needs to be global initiatives put in place to remove the need for plastic completely.

There are some already. Airlines are committing to plastic-free sustainable flights and the European Union has committed to banning some single-use plastics. Despite all of this, I can still walk down to a Coles or Woolies and buy a plastic bottle of water or Sprite or Gatorade etc. It is honestly mindboggling to think about how reliant we are on plastics. Alternatives like paper straws are amazing in theory but paper has its own problems. Not least of which is the fact that it requires the harvesting of our natural resources to create. Most paper straws will break down in six months which is great compared to the 1000 years of plastic but there is an alternative out there that can beat that. There is an alternative out there that will not only degrade in just one month but is also edible, so that it does not pose any danger to our wildlife. There is a solution to the problem of plastic and it is called Notpla.

The key is quite literally in the name, this is not plastic. Invented in 2013 by Rodrigo Garcia Gonzalez and Pierre Paslier, Notpla is an all-natural and, “sustainable packaging solution.” Notpla is made from seaweed extract and is totally compostable. You can make the argument that this, similarly to paper, requires the harvesting of our natural resources to create. The difference is that seaweed requires zero fresh water, zero fertilizer and can grow extremely quickly. Brown seaweed can grow up to a metre a day, nearly 30 times faster than land-based alternatives. This makes it a more sustainable, more reliable option. Plus, it is very poetic that the sea and her forests could potentially save the five oceans from pollutive destruction. That is how important this material is. Manufactured by London-based startup Skipping Rock Labs, Notpla is essentially a gelatinous film that can be molded and shaped into different forms. Currently, its most famous form is a small bubble called OOHO. 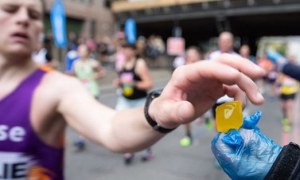 OOHO’s are small, 10-100ml liquid capsules that are designed to be an alternative to plastic water-bottles. Because the film itself is edible, you can just eat the whole thing in one gulp or you can bite into the outer layer and drink the liquid inside. As the company’s original invention, OOHO’s have been in the public zeitgeist since 2013 but have only really started to gain mass popularity recently. In 2019, Notpla partnered with Lucozade to give runners at the London Marathon their hydration in the latter stages of the race. Historically, this event has generated over 700,000 single-use plastic bottles. Replacing those with a capsule that degrades as fast as most fruit can only be a good thing. Later that year, the company won awards for a partnership with Whiskey manufacturer Glenlivet. Compostable shots, brilliant. Public successes like this will help to propel the company forwards from small start-up to major wholesaler.

At the moment, the company is focused on supplying big events like the marathon and other festivals, with a goal to greatly increase their output by 2021. Obviously, their services are on hold right now due to COVID-19 but the applications are clear to see. The OOHO capsules can be used for hydration at sporting events, alcohol at festivals and as packets for condiments like tomato sauce and gravy for your wholesome pub feed. In each case, the current norm involves plastic containers like bottles and sachets that result in extensive waste and damage. With sustainable initiatives like this, price-point is typically the major barrier but Notpla is actually cheaper to manufacture than PLA and other plastics. There really is no reason why this shouldn’t catch on at major events around the globe and there really is no reason why it can’t be mass distributed around either.

The major knock on OOHO is that it would be impractical as a plastic bottle replacement due to its smaller size and comparatively flimsy strength. Interesting, given that plastic’s resilience is the exact reason why our oceans are struggling. The solution to this ‘problem’ is simple. The maximum size of an OOHO is 100ml and a water bottle is typically 500ml. If my calculations are correct, five OOHO’s equal one water bottle. All Notpla would have to do is package their five capsules in something biodegradable like recycled cardboard or bamboo. It’s pretty easy, if a bit weird, to envisage bubbles of water and soft drink on the shelves at your local supermarket. Potentially, OOHO’s could even be joined on the shelves by Notpla’s other products.

Earlier this year, Notpla announced yet another partnership, this time with online delivery service, Just Eat. The partnership spawned a new product, Notpla Liner. Every time we order a takeaway meal and it comes in a cardboard box, that cardboard box is actually lined with plastic as grease-proofing. Notpla liner serves the same purpose, just sustainably. Some other products in their pipeline include heat sealable films (Glad-Wrap), pure Notpla sachets for non-food items (screws, nails etc), and nets to contain garlic and onions. Again, in each of these cases we typically see plastic or high-density rope used, materials that contribute to the litter in our oceans.

The work Notpla are doing is truly import and inspiring and could make a really positive difference to Mother Nature’s health. Less destructive plastic, more sustainable seaweed. Seeing this used around the world would make Sir David Attenborough very happy indeed and it would surely make you and me smile as well.

Jashan is a Melbourne based journalist with a specialisation in sports and media. He also has a keen interest in sustainability and Ethical buying. Check out more of his work at https://onlinehubmedia.com/